COVID-19 Update: Open for business as usual. Reduce the number of workers on site with our vacuum excavators. Enquire Today!

8 incredible myths about vacuum excavators you should never believe 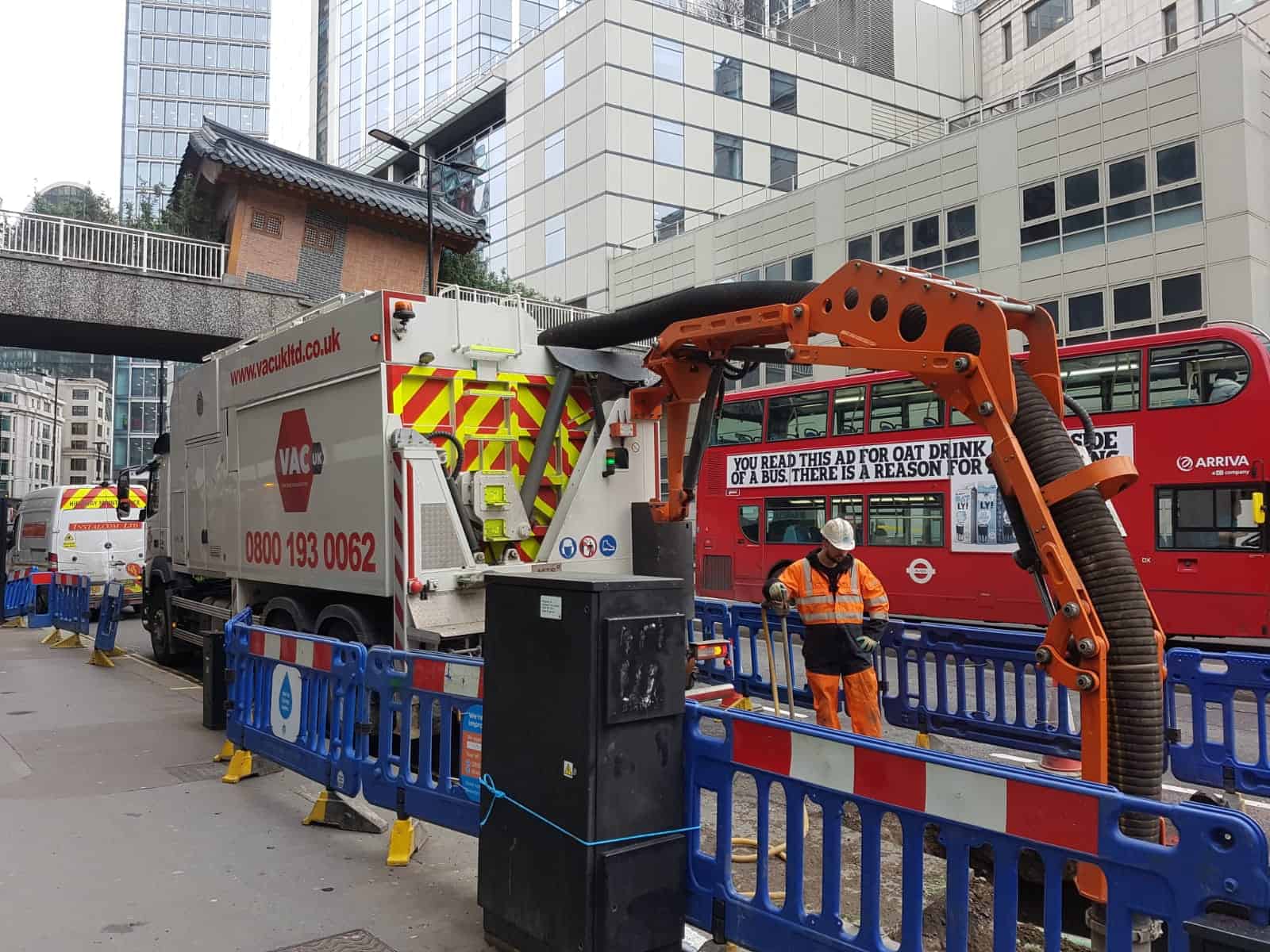 1. Vacuum excavators are expensive to hire

Vacuum excavators are almost always the most cost-effective way to dig around live utilities. They are also proven to be the safest.

The chart below shows that the cost of manually hand digging out any job of more than about 15 cubic metres is always going to be more expensive than using a vac ex. What’s more even 15 m3 will take seven times longer to manually excavate. What a vac ex can achieve in a day would typically take a single man almost a fortnight to complete.

We are the first to admit that calculating the figures in the chart is not an exact science. It can depend on multiple factors such as how productive the digging gang and the strength of the suction excavator. Ground conditions also make a difference. While the chart shows an average, Vac UK has completed jobs in ideal ground where 50m2 a day has been excavated making the vac ex even better value against a ground digging gang.

But this is almost to miss the point. The real value of vac ex comes in the safety it provides.

The most dangerous way to dig around live utilities, where the danger from a strike causing death or serious injury, is manually. The chance of a strike using vac ex is minimal. A pretty compelling reason on its own to make sure that nobody faces the highest cost of all. 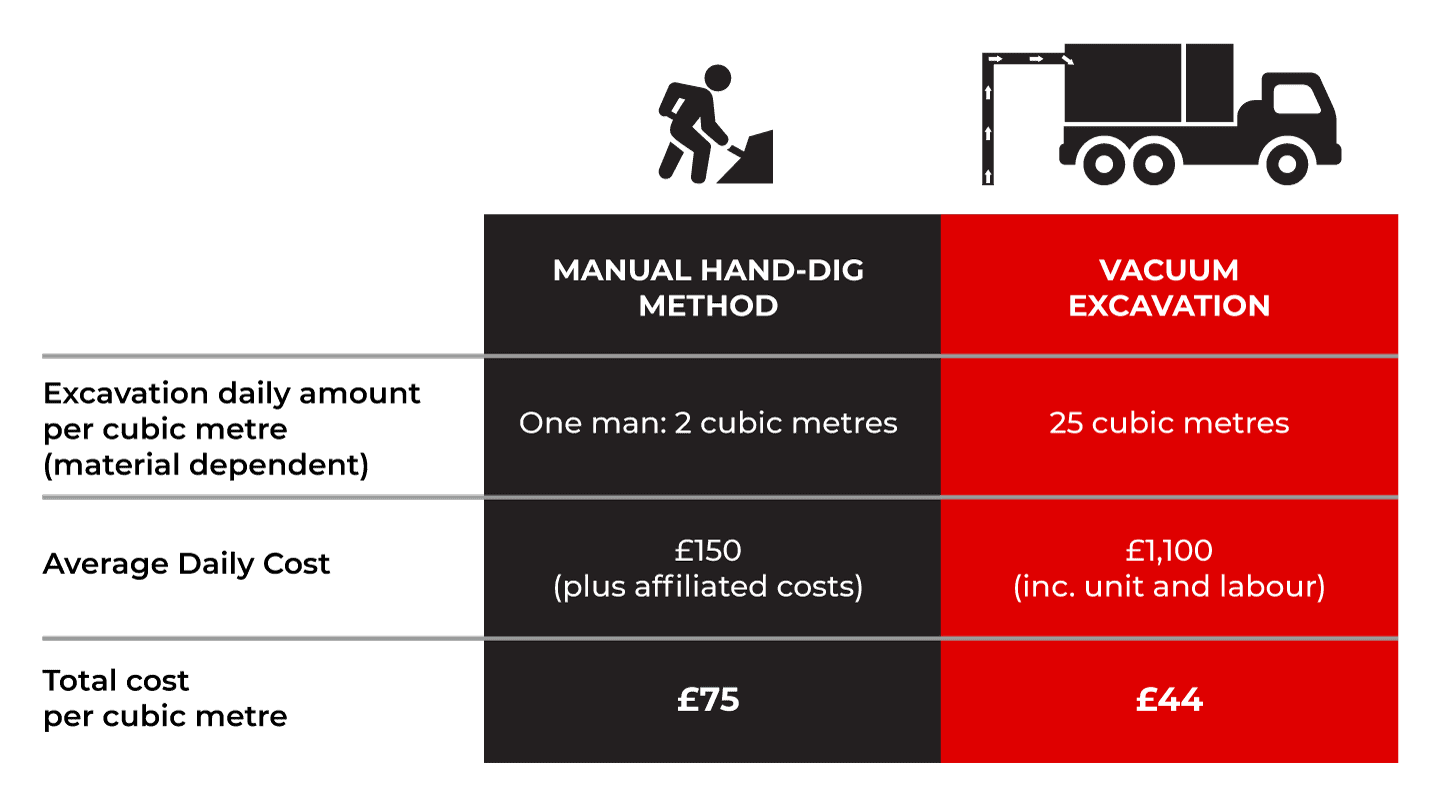 2. There are other safe methods apart from Vac Ex for digging around live utilities.

As you can see from the chart above, most utility strikes are caused by traditional methods including hand tools and minidiggers. As a construction supervisor, manager or director it is our responsibility to ensure we use the safest equipment available for the job.

Is it fair on construction workers to ask them to dig around live cables in urban areas which could cost them their life when a vacuum excavator could have been made available?

Often the excuse used is that a vacuum excavator would have been too expensive.

However, as we have seen above, the conclusion that a vacuum excavator is too expensive is largely a myth based on incomplete facts.

The average hire cost of a vacuum excavator with two operators is just over £1,000 per day. Given that each machine comes with two experienced people and costs at least £400,000 to purchase, most people agree that the hire price is actually very reasonable.

3. Vacuum excavators can’t be used in many types of soil conditions

The table above shows the suction speed of a vacuum excavator operating in different ground conditions. The vac ex is quickest sucking up water, followed by sand and the slowest suction speed is with heavy soil and clay.

It’s not possible to use a vacuum excavator when digging in hard rock but the vac ex can pick up large loose rocks.

In the UK, the hardest vacuum excavation ground formation we regularly come across is London Clay. With the most modern and powerful suction excavators, even this tough clay is no problem although it is obviously a bit slower than other, looser ground materials.

Suction power and performance has increased dramatically in recent years, so it’s important when you hire a suction excavator to check the make, year, model and performance. Not all vac ex’s are created equal and this is especially important to consider when you excavate in harder ground.

Also, using a vacuum excavator allows you to dig a hole which is the exact size required. This keeps the cost lower as you have less area to reinstate. It’s like keyhole surgery for the civil engineering industry.

4. It’s silly to use a vac ex when you can use a shovel

The Institute of Civil Engineers pointed out that construction and agriculture are the two sectors in the UK that have most lagged behind the times in terms of introducing robotics and digitisation. The construction industry has been particularly slow to adapt to changes in technology.

This is not about reducing workers: it’s about making sure we can meet the construction industry’s requirements and equip the future construction workforce with the skills to meet the needs of the twenty-first century. One of the best ways to do this is to make sure the industry embraces modern technology as doing so attracts younger people.

A recent article in the Construction Enquirer reported that self-employed construction workers’ rates have risen by 20 per cent in the last year. While it makes the sector more attractive to new entrants, it also means that it will be vital that employers deploy their teams where they add most value. Increasing use of automated technology will help to make that possible.

A great example of a way to attract younger workers into the industry would be with the potential of learning to dig a hole with a vac ex remote control similar to the one picture above which would be more appealing than standing knee-deep in mud with a shovel. Young people want to embrace the latest advances in technology and do not want to work in an industry with antiquated working practices.

The Chair of the Business, Energy, and Industrial Strategy (BEIS) Committee, Rachel Reeves MP, stated “The Government has failed to provide the leadership needed to help drive investment in automation and robot technologies. If we are to reap the potential benefits in the future of improved living standards and more fulfilling work”

MP Reeves concluded: “The real danger for the UK economy and for future jobs growth is, however, not that we have too many robots in the workplace but that we have too few. For all the potential of the UK, and despite our excellent tech and research base, the fact is that we are lagging behind our international competitors in our adoption of robot and automation technologies. Productivity, economic growth, and ultimately job-creation and higher earnings, will flow to those countries that capitalise on these technologies.”

It is essential that the construction sector now spearheads innovation and the adoption of automation to make the most of the UK’s advantages in technology.

5. Vacuum excavators can’t be used in confined and difficult to access areas

Suction excavators can connect up to 200m of hosing in order to access confined or difficult to reach areas. This has numerous benefits including keeping the operatives even further away from the danger zone and allowing the vacuum excavator to be parked in a safer location away from the worksite. 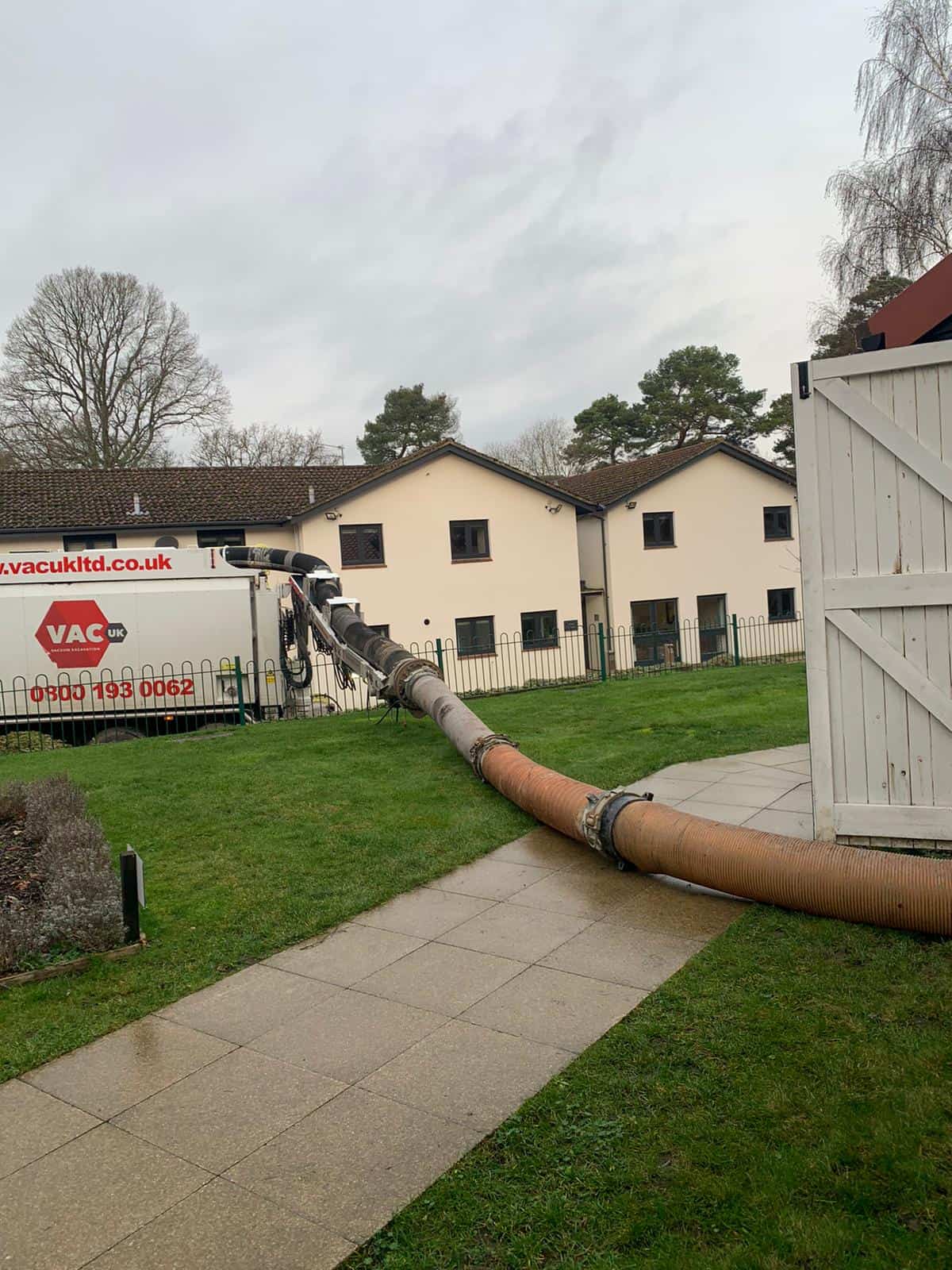 6. Using a Cat and Genny rather than a vacuum excavator is sufficient

If you dig up almost any footpath in the UK there are an amazing amount of utilities and services beneath the surface.

In theory, it should be possible to use a Cat and Genny or ground penetrating radar to trace these utilities.

However, the cables and underground pipework are often so close together and haphazard that its impossible, no matter how modern the equipment, to know exactly what is beneath the ground – until it is dug up.

Even if you did know what, there’s such a variety of underground assets, laid so close together that the only way to safely dig around them is with a suction excavator.

Digging around them by hand or with a machine would risk damaging the assets or causing a catastrophic health and safety incident.

It would be a pretty brave soul who fancied digging around the utility pipes shown in the picture below with a shovel? 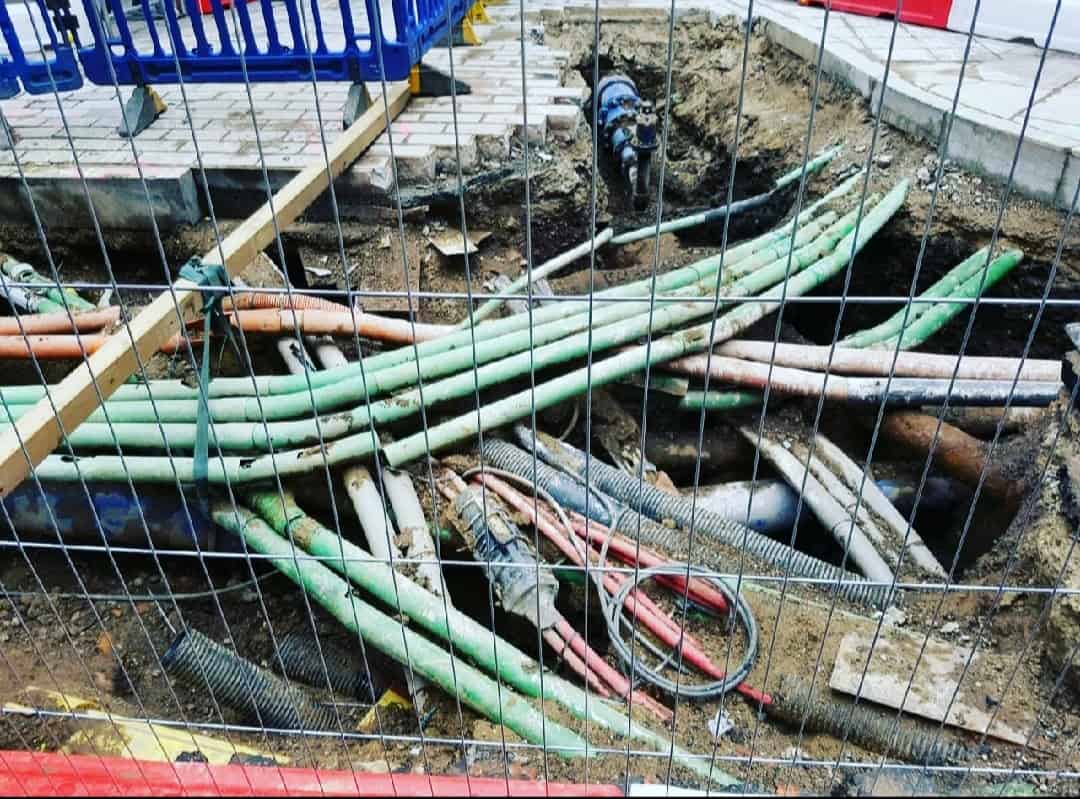 7. Anyone can drive a vacuum excavator

Driving a vacuum excavator is a highly skilled job. The operators need to have a HGV class 2 license as they are operating a heavy goods vehicle.

A vac ex is a safe piece of equipment but only when used by a skilled operator. Suction excavator drivers are some of the highest paid plant operators in the industry as they are highly skilled and operating in a safety critical environment.

Vac ex drivers need to learn the operating procedures of their employing firm, the CPCS standards for operating vacuum excavators. They also often receive extra training from the vac ex manufacturer in the individual handling characteristics of the different machines. 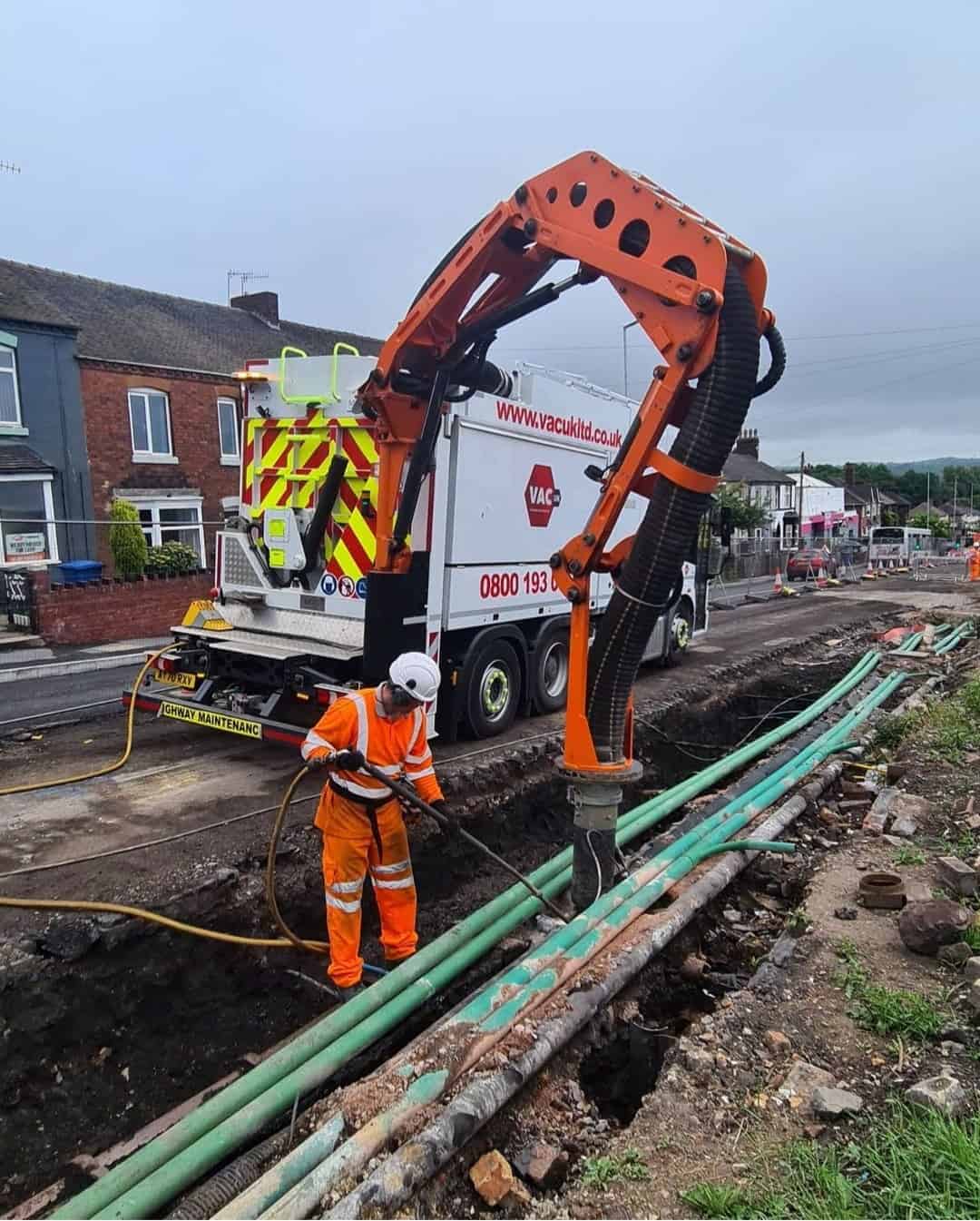 8. When I hire a vacuum excavator the most important thing is to get the cheapest price

A vac ex hire company may be charging cheap rates but what model, age, and type of vac ex are they supplying?

A second hand or used vacuum excavator costs between £200,000 and £350,000 depending on brand, age specification and condition.

If you asked for a quote from a vac ex hire company and one quoted £1,200 per day for a vacuum excavator and driver and back up man and the other quoted £1,000 then which one would be better value?

Most people would automatically assume it would be better value to pay £1,000 per day.

But if you checked the brand, age, specification and condition of the equipment it may be that the quote for £1,200 per day is far better value.

If you were unaware of the extra capabilities of the more expensive vac ex you maybe happy with the cheaper quote but it may be that the cheaper vac ex won’t be capable of performing the task.

Has the vac ex got a Euro 6 engine as, if it doesn’t, it won’t be able to go into many of the UK’s major cities?

Is the vac ex capable of suctioning hard clay? Many of the older and less powerful vac ex’s available to hire in the UK are not.

Does the vac ex have a tipping mechanism to tip into a passing grab wagon? If it doesn’t you will have to tip the spoil on site which could add extra transportation costs.

Does the vac ex have a vibrating skip? if it doesn’t then you will have an extra labour cost, a reduced productivity and an additional safety hazard as the driver will need to hose out the skip to remove the soil each time he tips the vac ex.

Are there additional safety features on the vac ex including 360 degree cameras and perimeter lighting? If not then the vac ex will be more dangerous on site.

These are some of the non standard features that are not available on all vacuum excavators. It maybe that it doesn’t matter. It maybe that the cheapest vac ex will do.

However often this isn’t the case and people pick the cheapest vac ex to try to save a couple of hundred pounds and the reduced productivity on site and the extra safety and environmental risks put unto the project as a result of hiring substandard equipment end up being far more expensive. 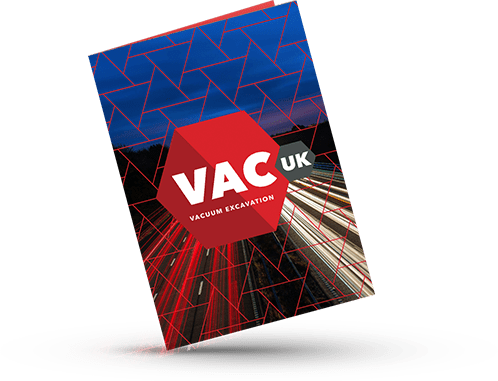